Grenada has a strong heritage rooted in Spanish, French and British colonial architectural traditions> Today the capital, St. George’s, enjoys a stronger historic tradition than most Caribbean islands. Despite the strong historic preservation movement in Grenada there is, in my opinion, some confusion over design aesthetics suitable for newly constructed buildings. Sometimes this confusion has led to poor design for new buildings that attempt to mimic colonial architecture. There are few architects who dare to challenge this approach and we should therefore take note of the contemporary architecture of the firm of architects, COCOA who have produced a number of modern contributions to Grenada’s built environment. Their work respects the traditions but expresses the historical references within a modern vernacular. Also worthy of mention here is Charlotte Kraemer of IXORA interior design that works closely with COCOA to ensure the interior fittings and fixtures enhance the contemporary character of the spaces.

The Heaven & Earth Spa is a modest building, no larger than the size of a small residence. The layout is very open with only a few doors to spaces on either side of a timber walkway. In keeping with the branded character of the health spa, the selection of materials is based on extensive use of timber for wall cladding, flooring, roof structure and decking and with limited use of fair-faced board-marked concrete for a feature wall.

I had planned to do a dusk shot within the main open studio space and had set up my camera on tripod early once everyone had left the building and prepared to wait for the sun to set. Two unexpected surprises caught me off guard. The first surprise was when I suddenly discovered that the lights in the spa rooms were not switched on. I determined that it was now necessary to illuminate the odd shaped window – but the spa rooms were now locked. It was too late to shift the composition so I had to find a quick solution. I can’t imagine how the idea came to me but I decided that I should climb through the very narrow window in ‘true-Trini-style’ to turn on the lights and then returning via the door that could be opened from inside to continue exposing the shutter. It was getting late and I was taking exposures about three minutes apart so as to capture the best lighting balance between the sky and the interior. The second surprise came in the middle of my series of multiple exposures. By now it was now pretty late, perhaps about seven in the evening. Suddenly a couple of cars with headlights blaring arrived to disturb my multiple exposure sequence. Out jump a dozen or so foreign visitors with their courtesy rum punches in hand proudly led by the hotel manager showing off the facilities to his prospective clientele in tow. The manager was just as surprised to see me as I of him and a few choice words pass between us before he realized that I was not an intruder. It was an awkward moment: I was in the middle of a photo-shoot. The manager looked rather puzzled at me standing there patiently waiting with camera on tripod and asked in a British accent “so, did you want us to leave then?” to which I smiled and politely replied “yes…please” with the sort of inflection that implied ‘as soon as possible’. After all, this was his hotel and his guests so there was not much else I could do. I got the shot eventually but it could have ended much worse! 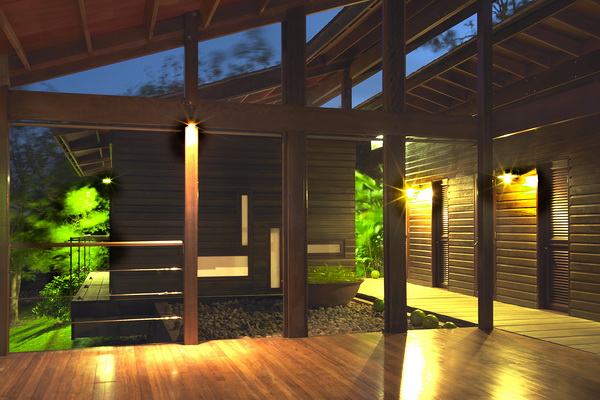 Here is the dusk shot – see the rectangular white panels – that’s the lights coming though from the spa rooms beyond. Can you guess which window I climbed through? By the way I am 67 this year! 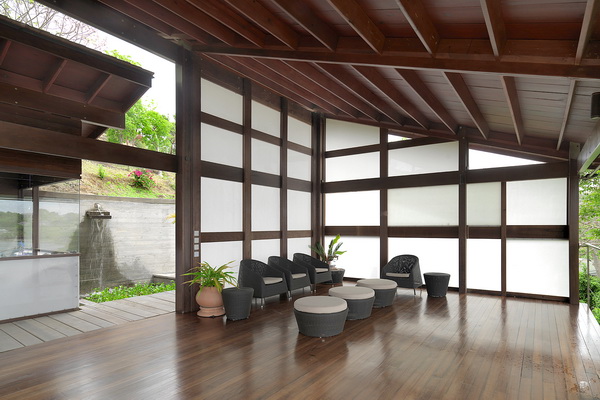 This is the open entrance studio that doubles as a waiting area as well as a multi-purpose studio for exercises, ballet and lectures on health. The polycarbonate wall panels add to the natural day lighting of the space. 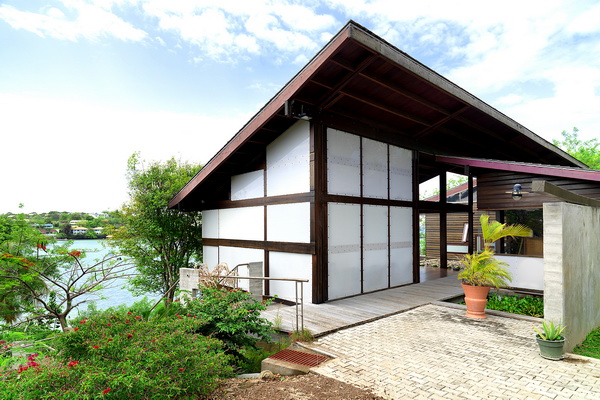 The entrance to Heaven & Earth Spa from the gravel driveway 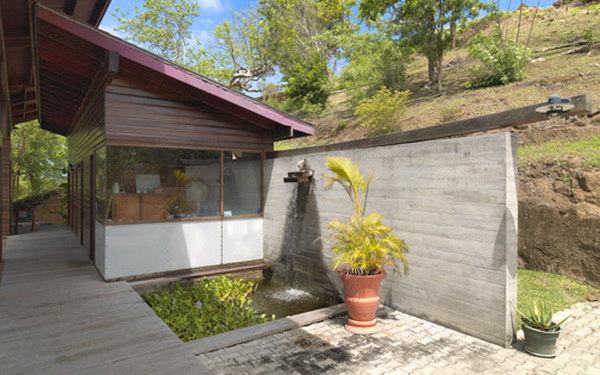 The entrance court with fountain and lily pond 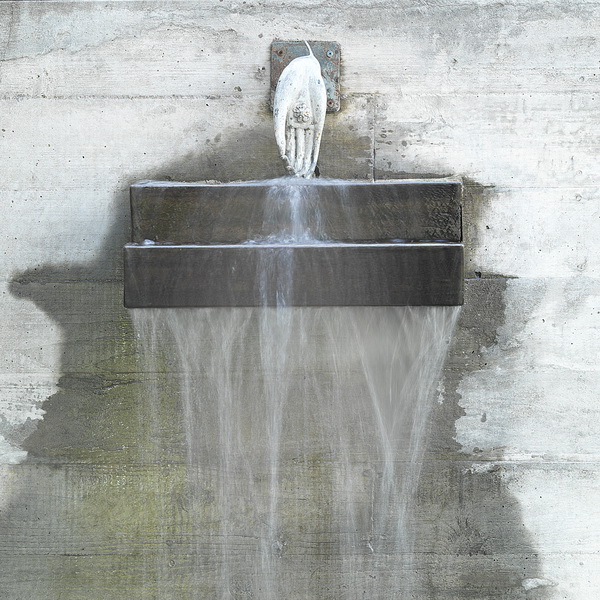 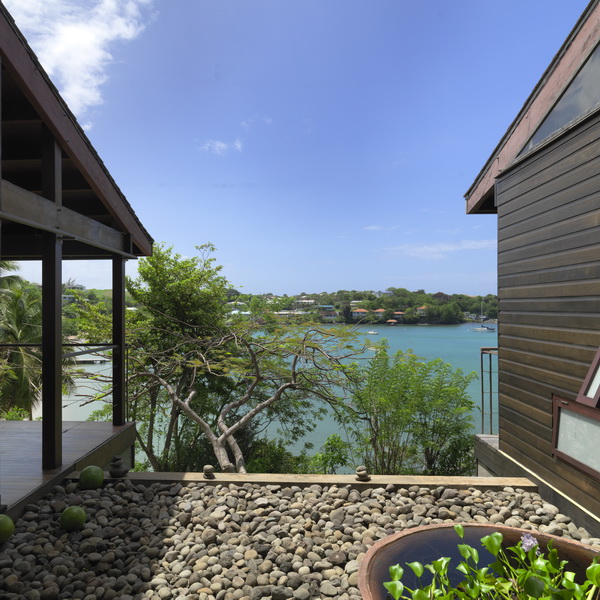 The courtyard view to the bay below 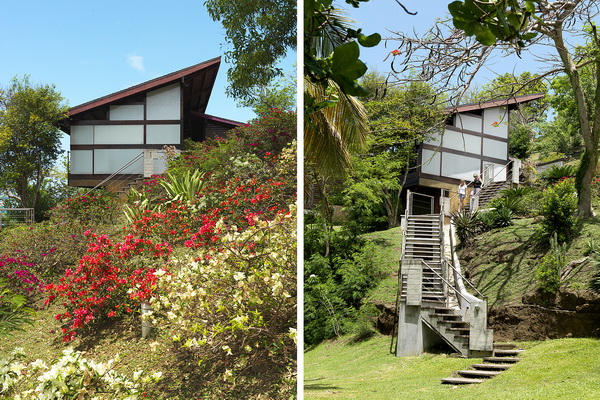 The staircase leads from the hotel and beach up to the health spa while the shed structure echoes the slope of the hillside. 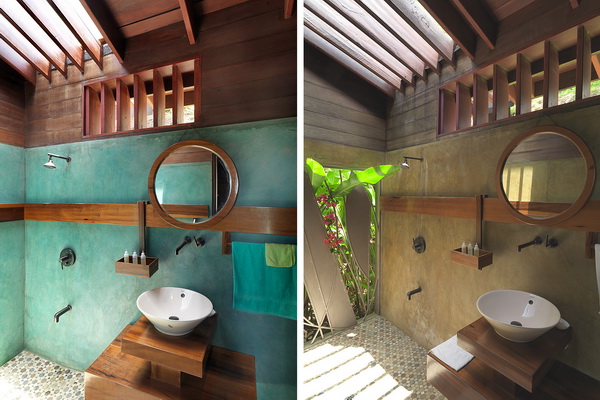 The washrooms with lots of natural ventilation and use of timbers, hand-stained colored walls and carved metal designed grilles – very nice. 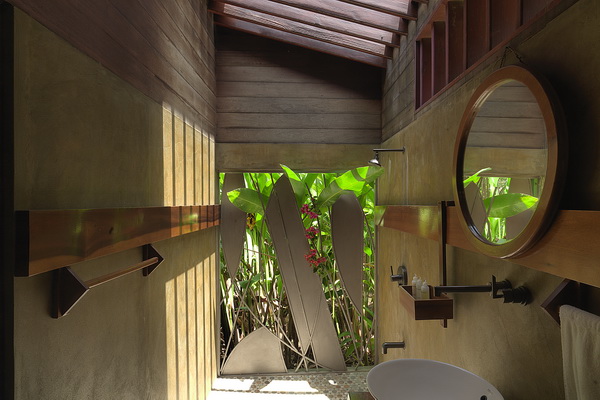 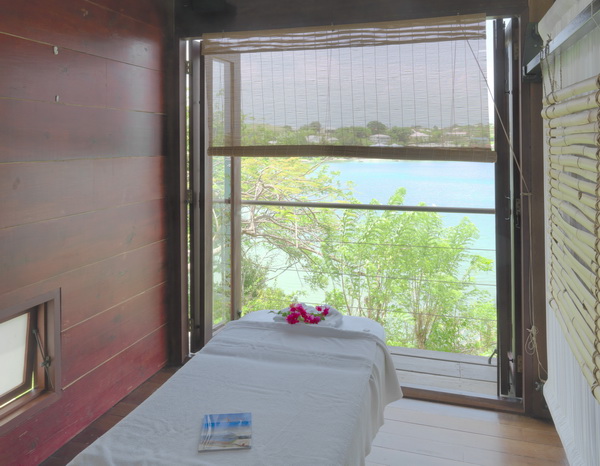 The massage table with a view of the bay below 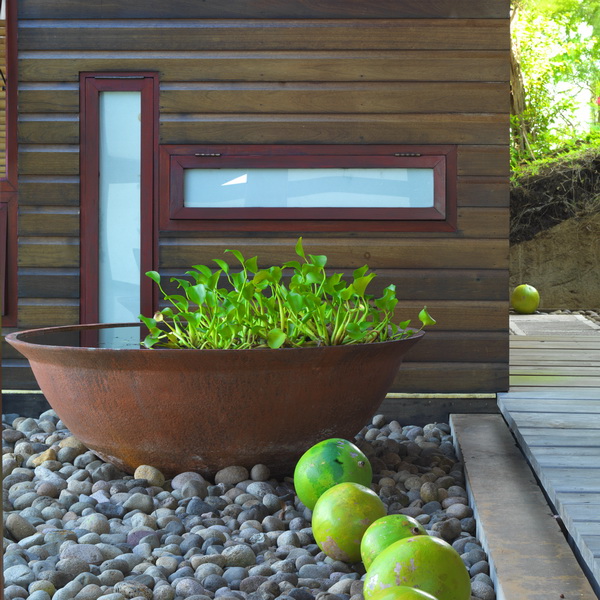 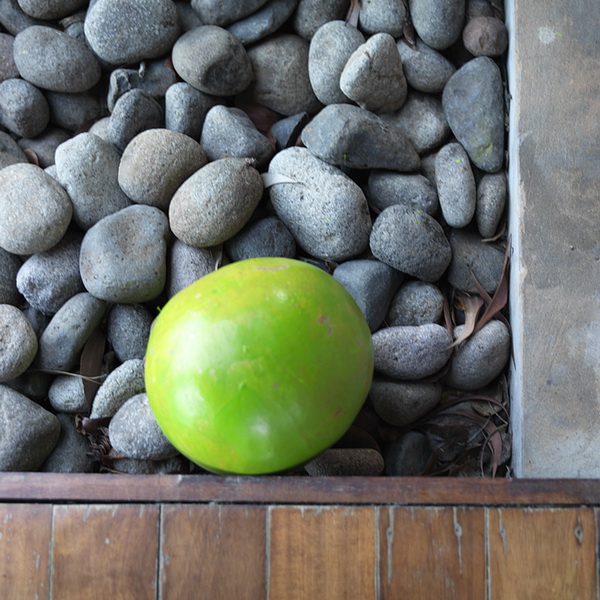 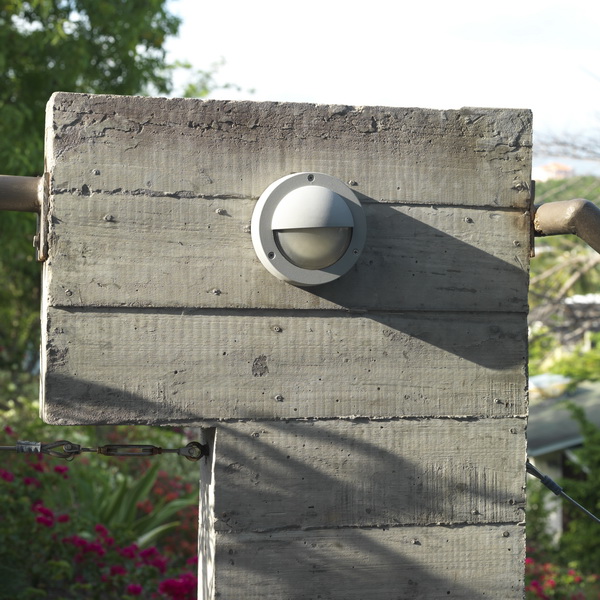