We continue with Part II of the story of photographing projects in the Leeward Islands. In Photographing Leeward Island Projects Part I, the focus was on the first leg of the journey from Trinidad via St. Lucia, Guadeloupe, arriving in Antigua where Kevin [first mate/ musical director] left for a week to attend his daughter’s graduation in the USA. Having sorted out the fuel-clogging problem the crew of Philip [captain/ mechanic/ plumber/ chef], Gerry [anchorman/ video/ interpreter], Brien [bumper/ winer] and me [photographer/ dish washer] set off for the second leg from Antigua to St. Barts, Anguilla, St. Kitts, and returning to Antigua. 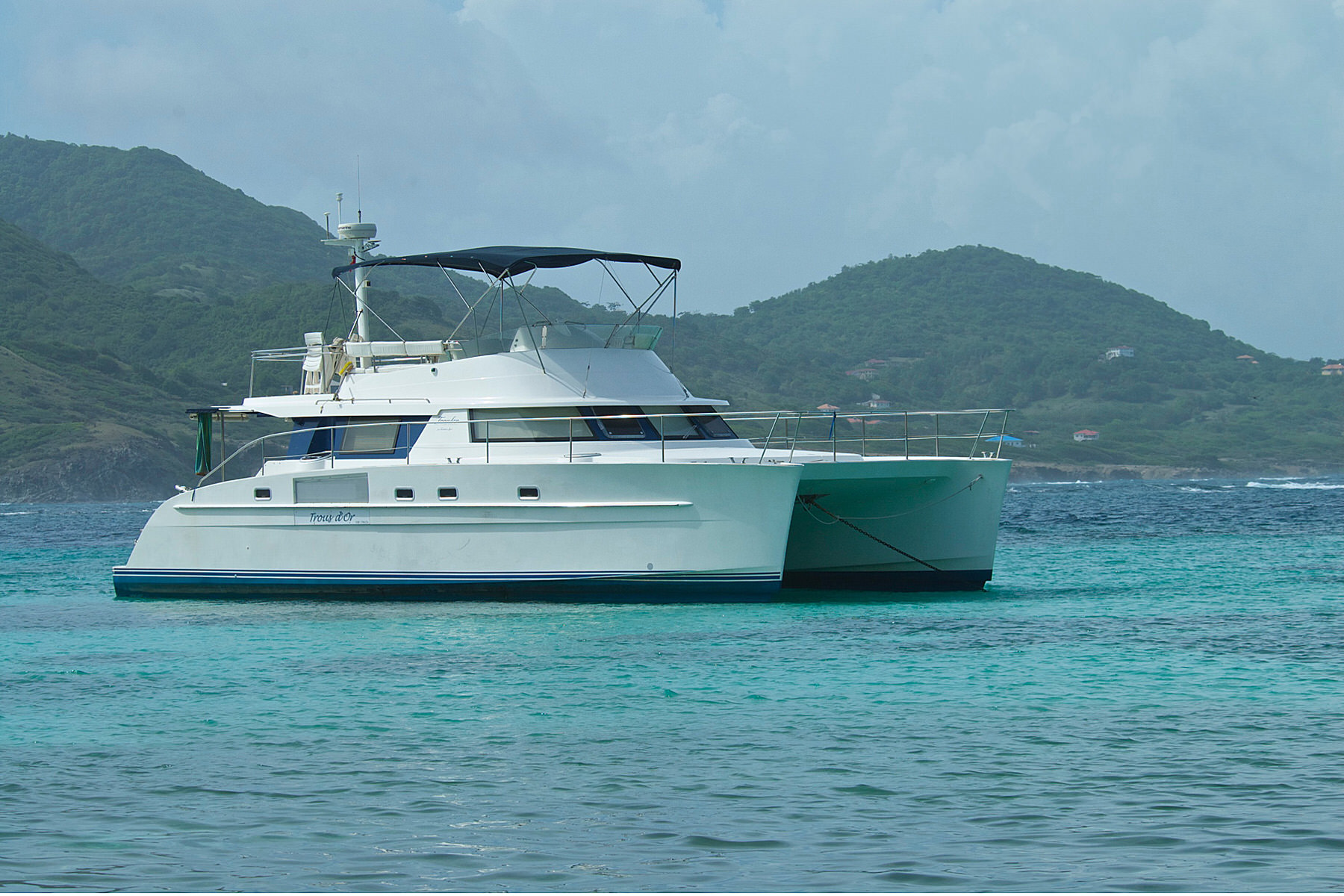 The sea was kind and weather good so we arrived at St. Barts in good time. The port facilities in St. Barts were well appointed by comparison to other Caribbean islands we visited and obviously aimed at a thriving tourist industry. There is an array of fine restaurants and we certainly sampled their fine dining and wines in the short time we docked there. It just so happened that the day we were there, a cruise ship was off shore along with its hoards of tourists who had been shuttled from the ship to the dock by boat tenders. The connection we had with the local agent went awry so we had to find a taxi on the dock that proved to be very difficult because of the flurry of tourists who were obviously an attractive catch for any enterprising taxi driver. Despite the difficult odds we managed to catch a brand new Mercedes-Benz taxi driven by a young Caucasian Swiss taxi driver dressed in white shorts and black T-shirt. It cost us a small fortune for the taxi ride and it was at that moment when I recalled Jeffrey Totaro’s advice to me, “Carry buckets of cash.”

Okay, so Gerry and I eventually get to the house, Villa La Danse des Etoiles [Dame of the Stars]. The caretaker showed us the ropes and set off for the beach, leaving us alone at this very interesting house. I would have to say that this house was the best-finished house we visited and included a number of special lighting features. It features natural stone construction, a generous covered pool terrace, vanishing edge pool and landscaped sundeck, overlooking a stunning view of the Caribbean. Apart from these there were also a few quirky details that I could not resist capturing since Barnes Coy Architects clearly expressed their design intent in both concept and detail. The challenge for me was the contrast of light since it was a really hot day and by the time we got there the sun was in full force making it difficult to capture views that included both interior and exterior. Fortunately, good weather prevailed at dusk, so I got some nice shots [although the automatic pool pump switched off just at sunset and the water dried up over the vanishing edge]. 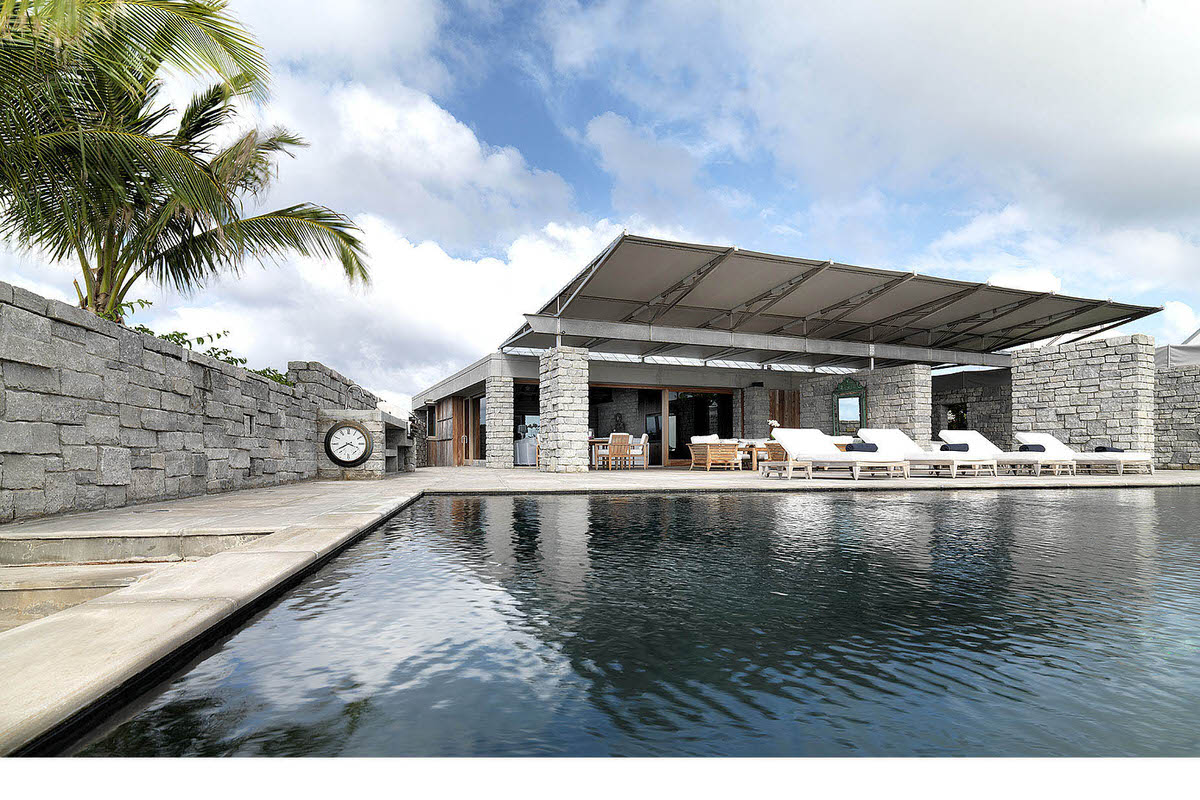 It was a short trip from St. Barts, passing by St. Martin and arriving at Anguilla where there was no docking facility. It was necessary to transport the camera equipment in plastic bags by dinghy between our boat, Trous d’Or and the beach jetty. There, Rohan Gopaldas, a young man from North America who manages Ani Villas, collected Gerry and I while Philip and Brien went on a driving expedition around the island in a car rental.

Ani Villas are two 5-bedroom villas with a tennis court, gym, games room, and swimming pools – all overlooking the Caribbean. The design of Ani Villas by LHSA+DP is very contemporary and one of the villas features an elevator and is designed for the physically challenged.  The day we arrived was in between two rentals and I was quite struck and impressed with the size of the staff [+/-15] and the efficiency of the operation involved in preparing the villas. Despite this busy time, the staff was very helpful to us while we photographed the villas. Unfortunately, the weather turned in the late afternoon and I was unable to get the golden hour shots I had hoped for. We were allowed to return the second day for a few hours and managed to get back to the boat in time to travel around the coast to get some seaside shots and a swim in the bay below Ani Villas. 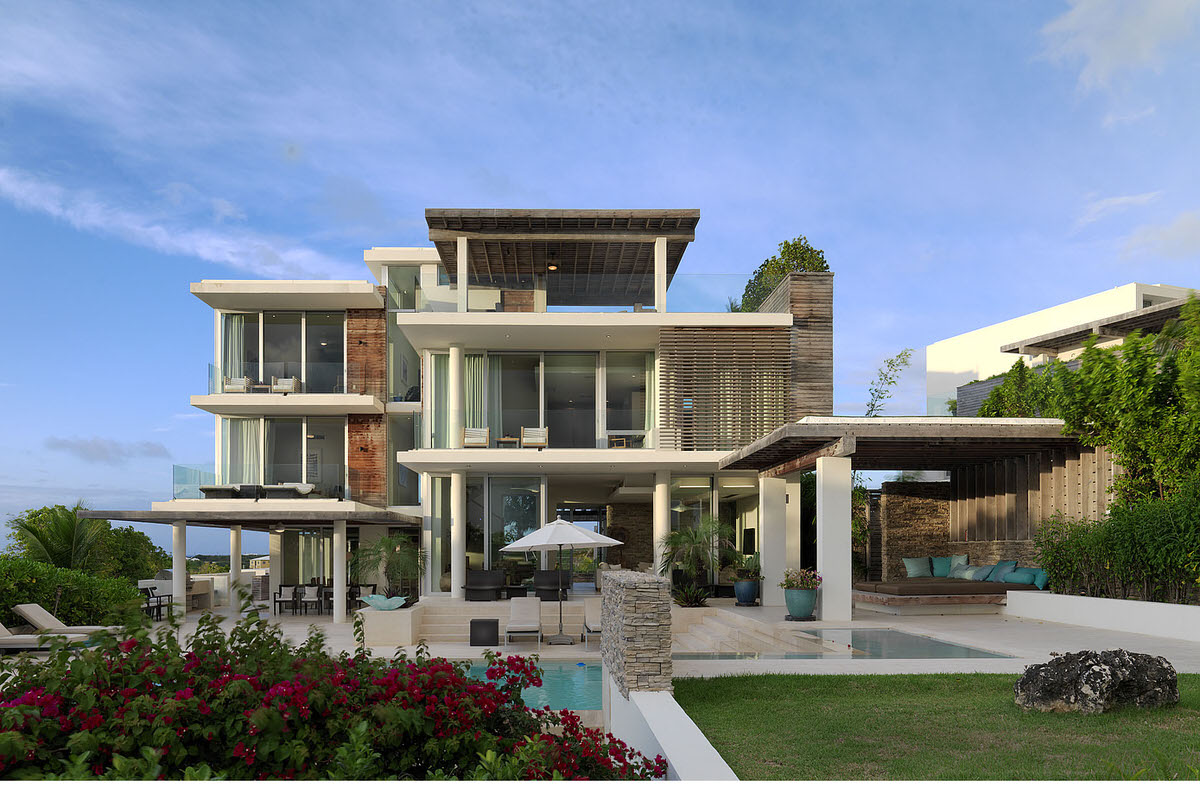 The trip from Anguilla to St. Kitts was difficult; the sea was rough and the wave action came across the bow. We got thoroughly soaked for most of the day. We were glad to dock at St. Kitts although the facilities were nowhere as good as that in Guadeloupe and St. Barts. Jamal Lewis and Lindbergh Alvaranga of Brisbane O’Garro Alvaranga met me at the dock and we proceeded to get a quick tour of the three projects to be photographed in two days.

Fish House is located on a bluff and is designed around the idea of a compass with four wings, representing as it were the four cardinal points of the compass with a circular staircase at the centre of the compass. I was all set up for a golden hour dusk shot when the weather turned cloudy and rainy. Still I was quite pleased with the composition using some of the knowledge I gained from Tim Griffith to release points. The exterior of Fish House needed a paint touch up but the interior was in good shape. 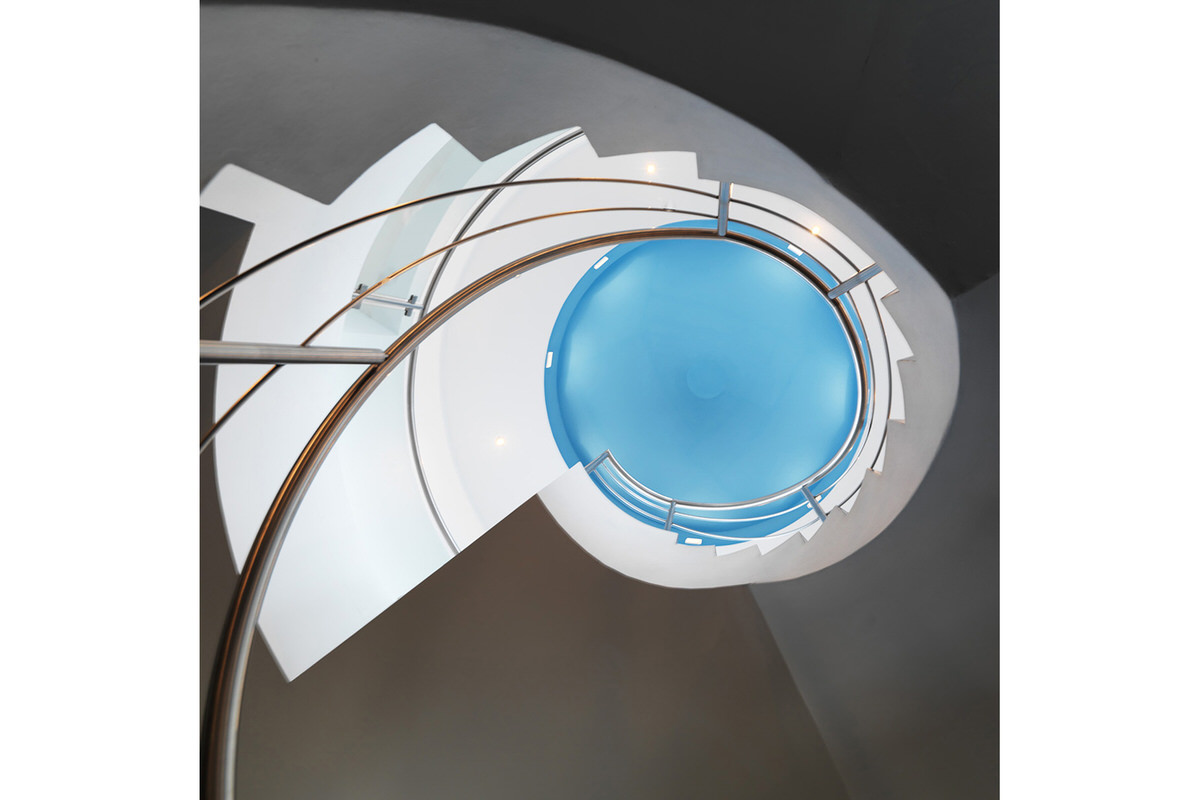 The Moorjani Apartments is a modest four-unit apartment project in a rather ordinary neighborhood. The design is quite flamboyant, using form and colour to achieve visual interest and a contrast with its surroundings. Regrettably the interiors were not nearly as colorful or as daring as the exterior. Again, the weather was a major factor with storm clouds setting up – no chance of any dusk shots here. 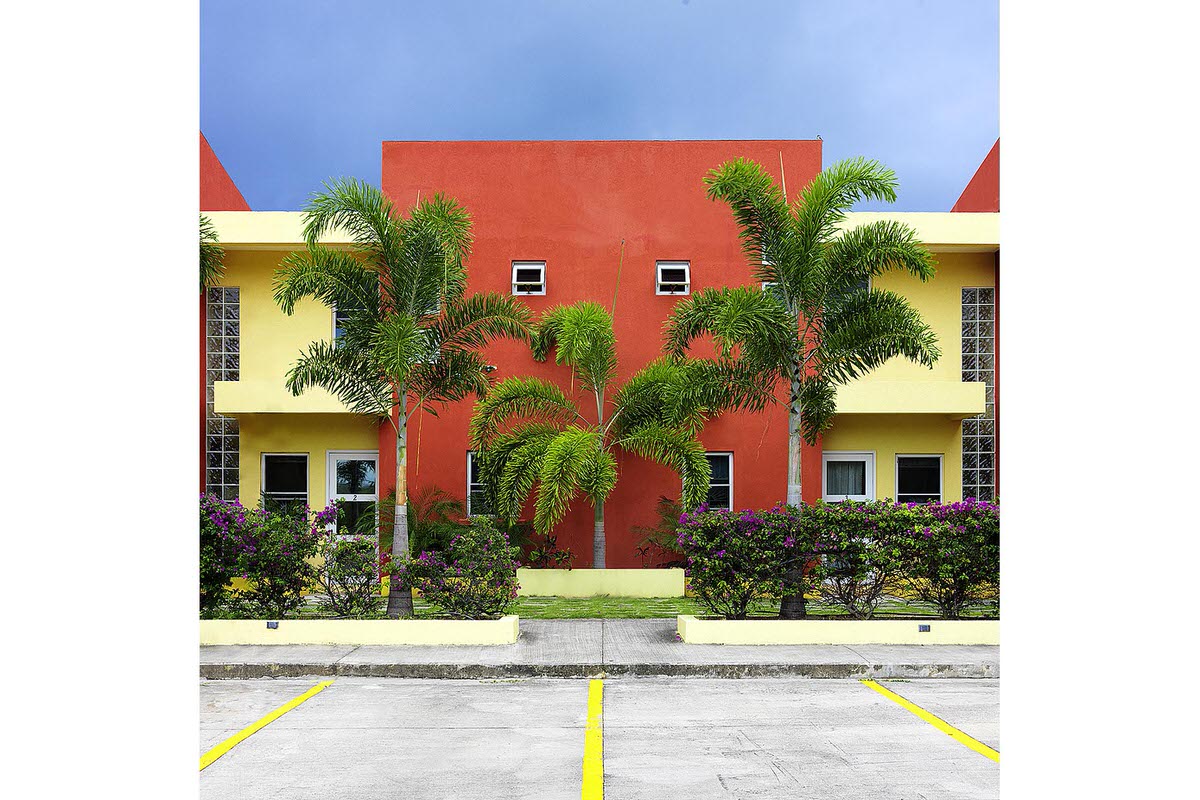 The Lewis House designed by Jamal Lewis is an example of a simple house adding value through design. The house is located in a twilight neighborhood and to me appeared to be the only house designed by an architect for miles around. It seemed to me that the house was recently completed and the landscaping had not yet been installed. The tweedy surroundings and the lack of landscaping posed a challenge for me to photograph the exterior. Consequently, most of the compositions were tight, leaving very little space around the house that might distract from the focal point of the house itself. 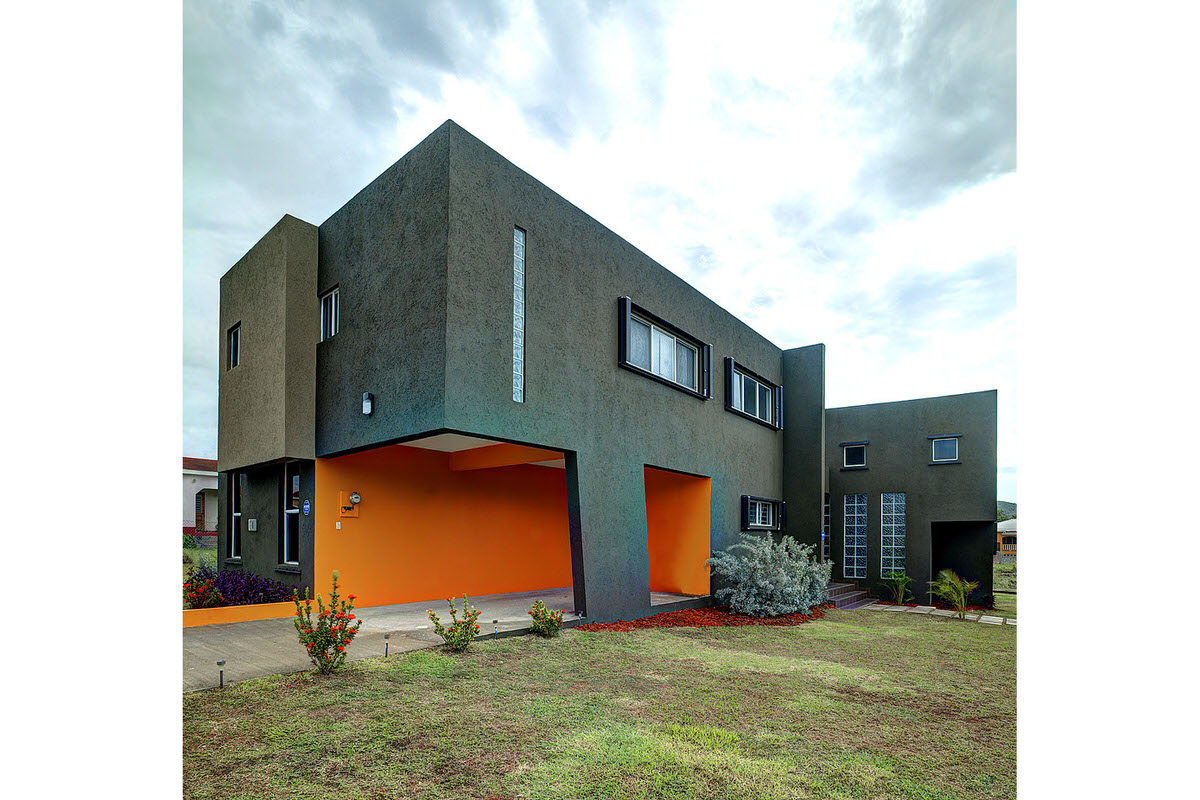 The weather really got quite bad and we abandoned photography earlier than planned, setting off for an overnight stop at Nevis before heading on back to Antigua the following day to collect Kevin. At this point, we have been at sea for 15 days with another week still to go.