This project is a major refit/ renovation and extension with the design intent to create transparent views of the ocean and yet achieve a reasonable level of security using a contemporary architectural palette. Architect Stephen Mendes is well known for major planning and commercial projects but here we see him convert the remnants of an existing house into a contemporary design as a fitting conclusion to his design career. The seafront is reclaimed with simple yet contemporary landscaping. Interiors are colorful and fitted out with high quality modern furniture and contemporary artwork in contrast to the simple white walls of the architecture.

The house is two-story with a central double height courtyard that allows an undisturbed view of the seafront from the entrance and most of the rooms on the ground floor. The north and south facades of the house are generally sliding folding glass doors with metal security grilles that open and allow the air conditioned spaces to be naturally ventilated allowing a more direct connection between interior and exterior spaces. Because of the architectural design I found that I composed images that were perpendicular to the façade in a one –point type perspective.

I had originally planned to photograph this project between May and August when the sun illuminates the north façade. However this plan had to be deferred due to maintenance improvements that needed to be completed. When the time finally came to shoot the project it was January when the sun would be in the south so that it was not really ideal to photography the front facade [north] of the house. Still it is better to have ‘a bird in the hand’ so I agreed to shoot the house in January and then return again when the sun is in the north.

This is a fairly large house and I decided to restrict photography to the public ground floor spaces. Still, being a large photogenic house, there were plenty of images to cover in one day. I had asked the owner to arrive at 6:30 AM to catch the morning light. Unfortunately I forgot to bring my hat so after a few continuous hours in the sun I decided to take a break at midday to return at about 3:00 PM hoping to catch the golden sunset hours.

What I learnt from this assignment is that one always has to be flexible to change one’s plans based on actual onsite conditions. I had originally thought that arriving early would allow me to shoot the seaside façade of the house from the southeast [with the sun over my right shoulder]. In reality this turned out to be less than ideal since the landscaping there cast a shadow on most of the façade and I ended up shooting the south façade from the southwest later at about 9:30 AM when the sun cleared most of the landscaping. I was also able to use a long lens [210mm] from an offshore jetty. By the time I finished shooting the exterior it was midday and I was shattered so I decided to take a break.

I returned in the afternoon invigorated by a shower and meal to shoot the interiors. One of the challenges of this particular assignment is controlling contrast while attempting to capture the design intent to achieve transparency. I had to boost interior lighting levels using a pair of ProFoto D1 flash units on tripods with umbrellas and when necessary employed Nikon Speedlight flashes to shape light and enhance features. Another challenge was the variety of color temperatures that proved to add to the complexity of post-production adjustments.

Thanks to burning of tires at the national garbage dump as a protest there was no golden hour that day in the Port of Spain area. Instead I ended up shooting a feature glass wall with colored feature lighting in the entrance courtyard as the light dropped at the end of the day. Hopefully I can return again to shoot the northern façade between May and August when the sun shifts to illuminate the north facade. The Shorelands Seafront house is very photogenic so for me it was a real challenge to limit the number of shots within the few daylight hours available. To do justice to a house like this requires a minimum of three days – a second visit is necessary. 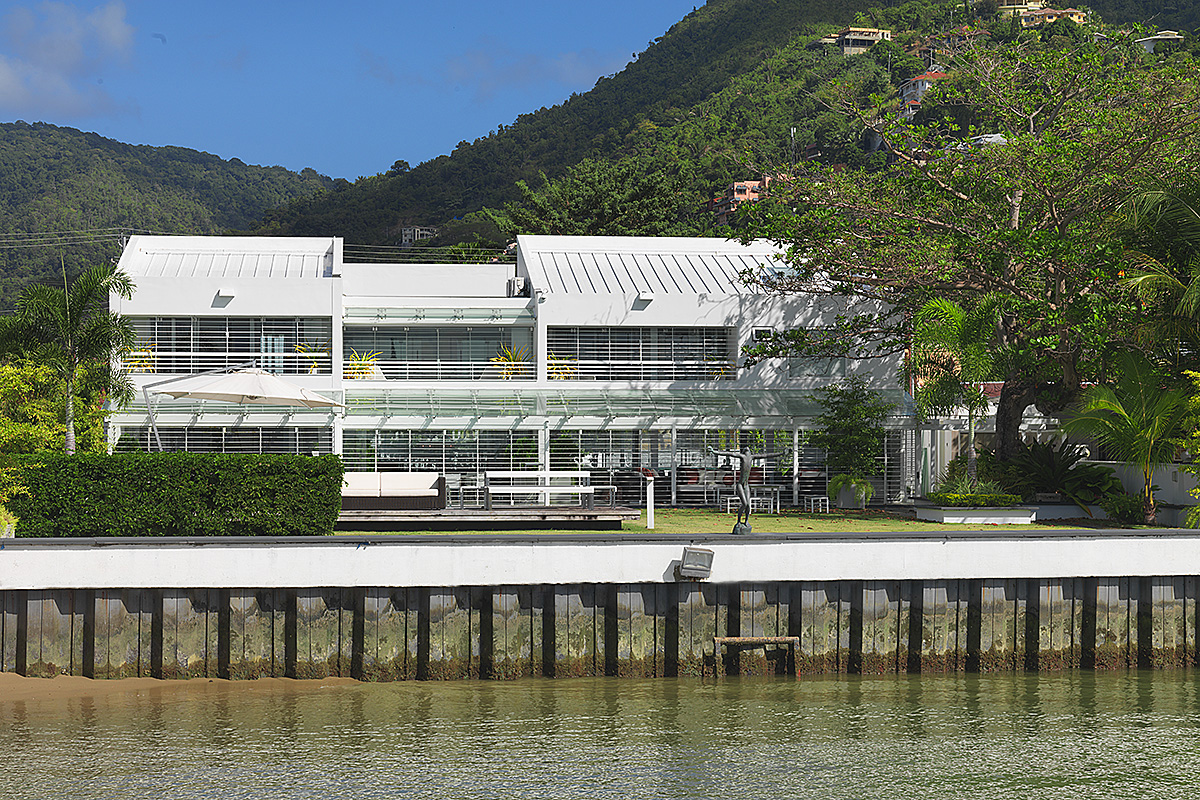 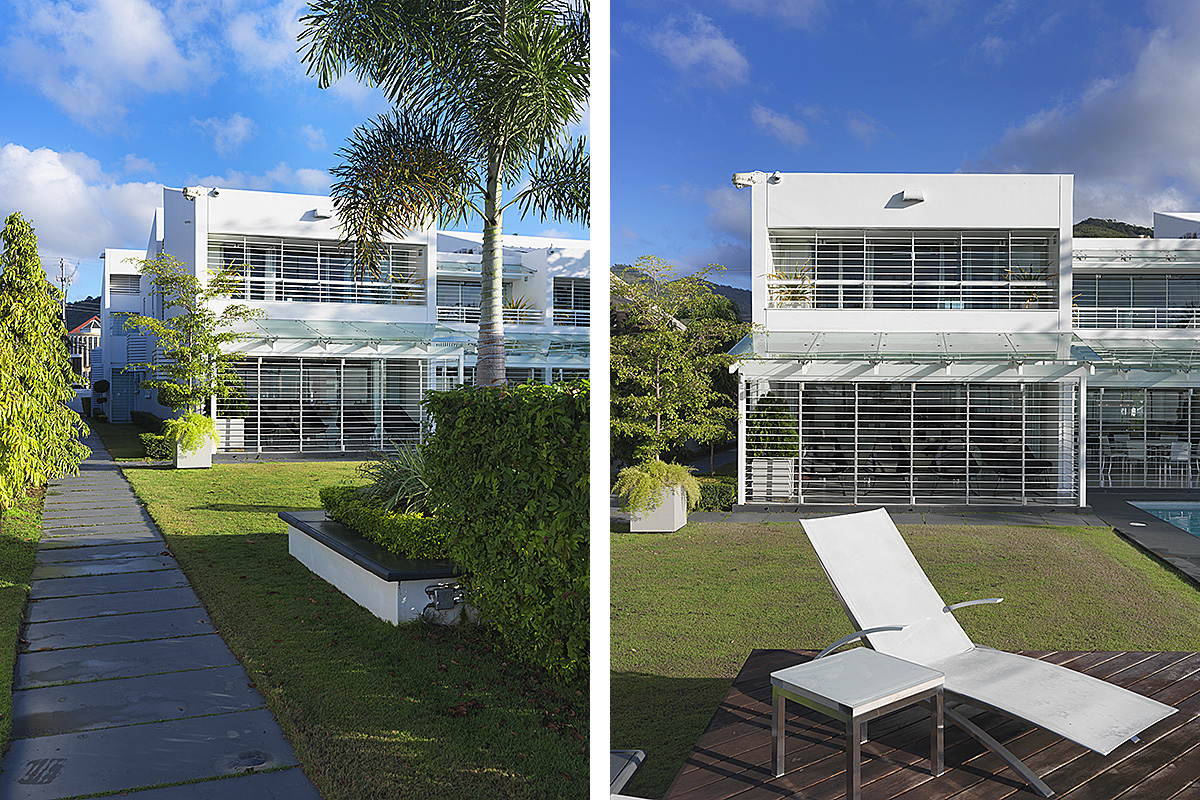 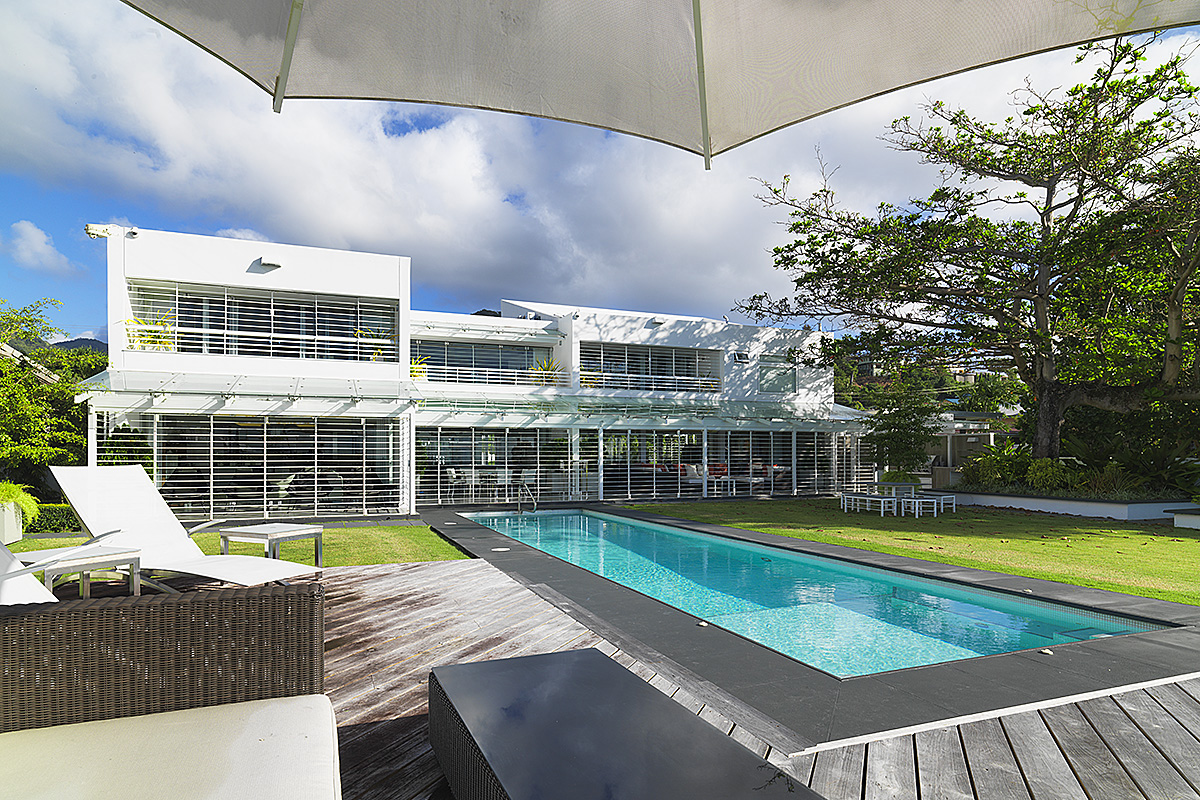 View of seaside from the pool deck 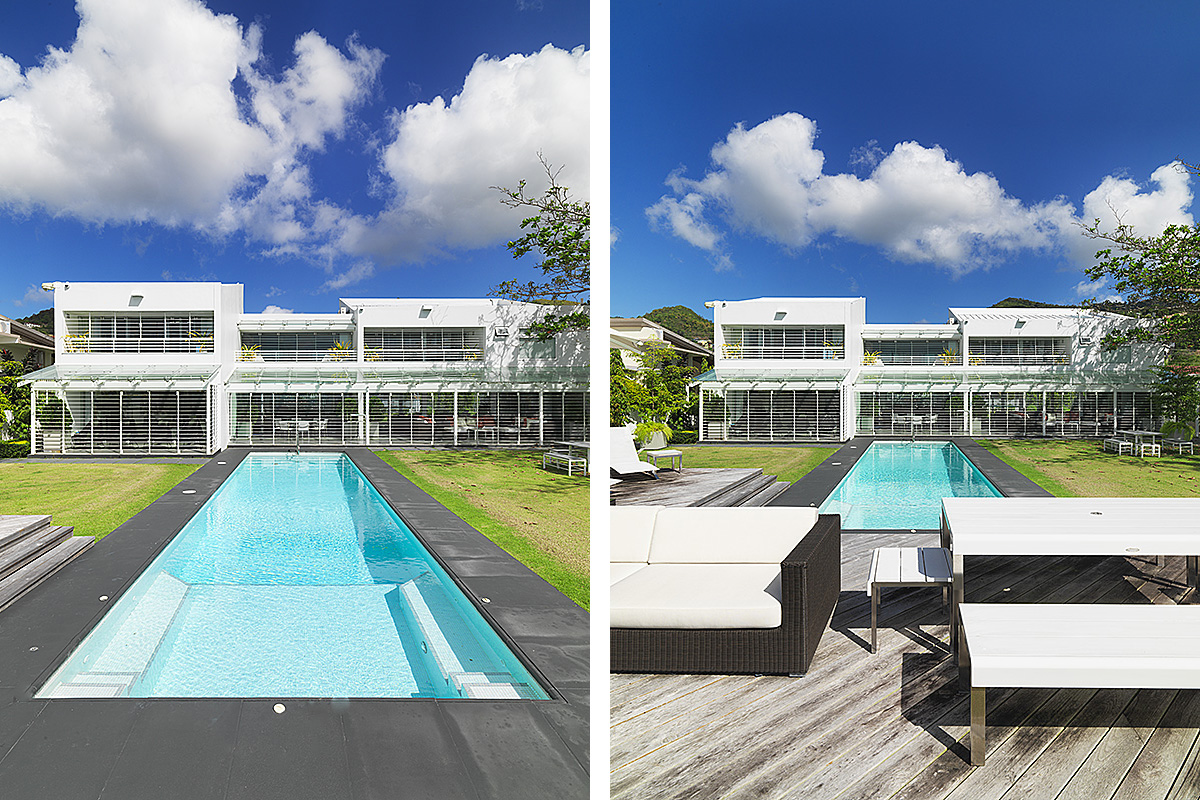 seafront view from the pool deck 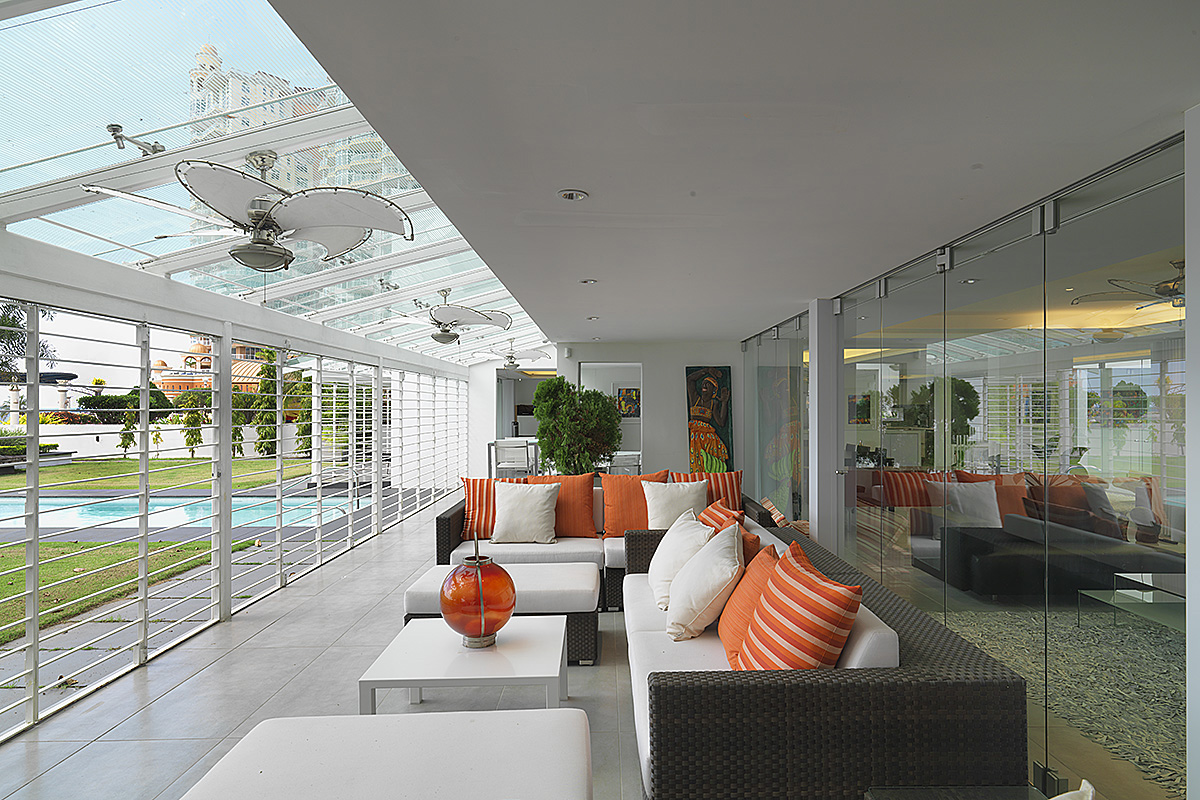 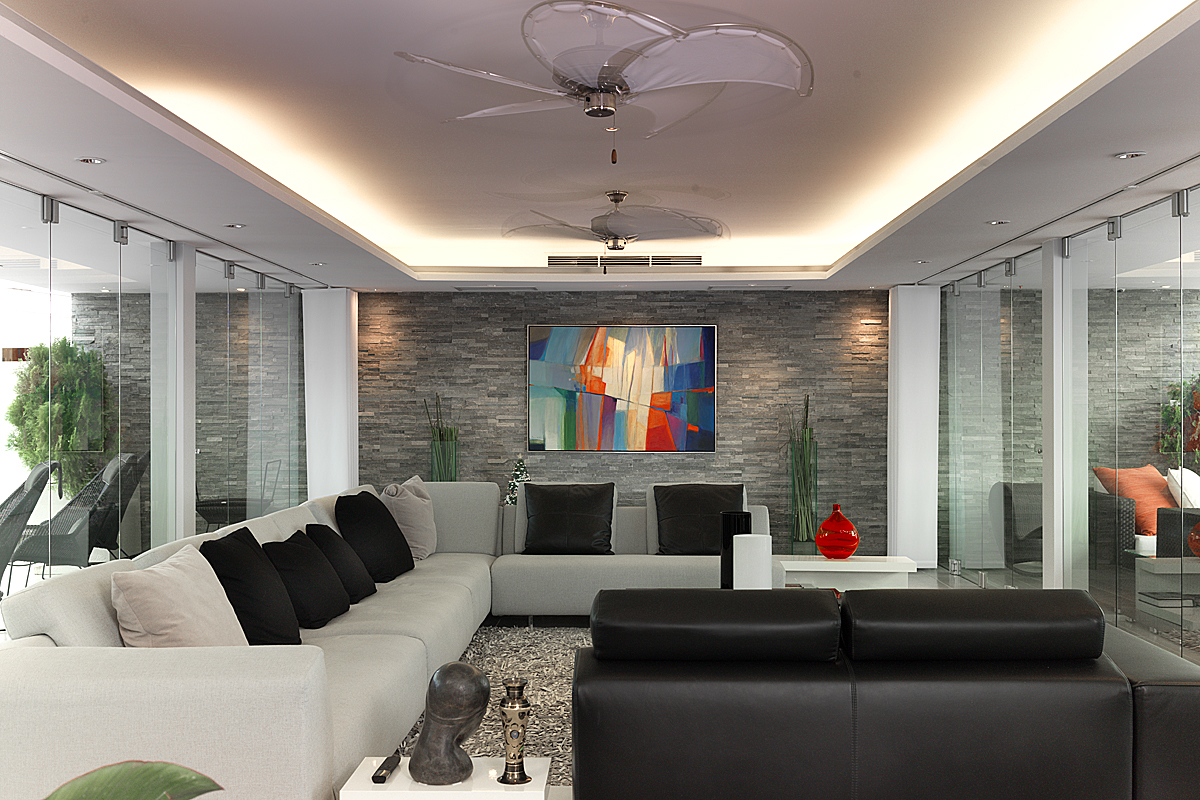 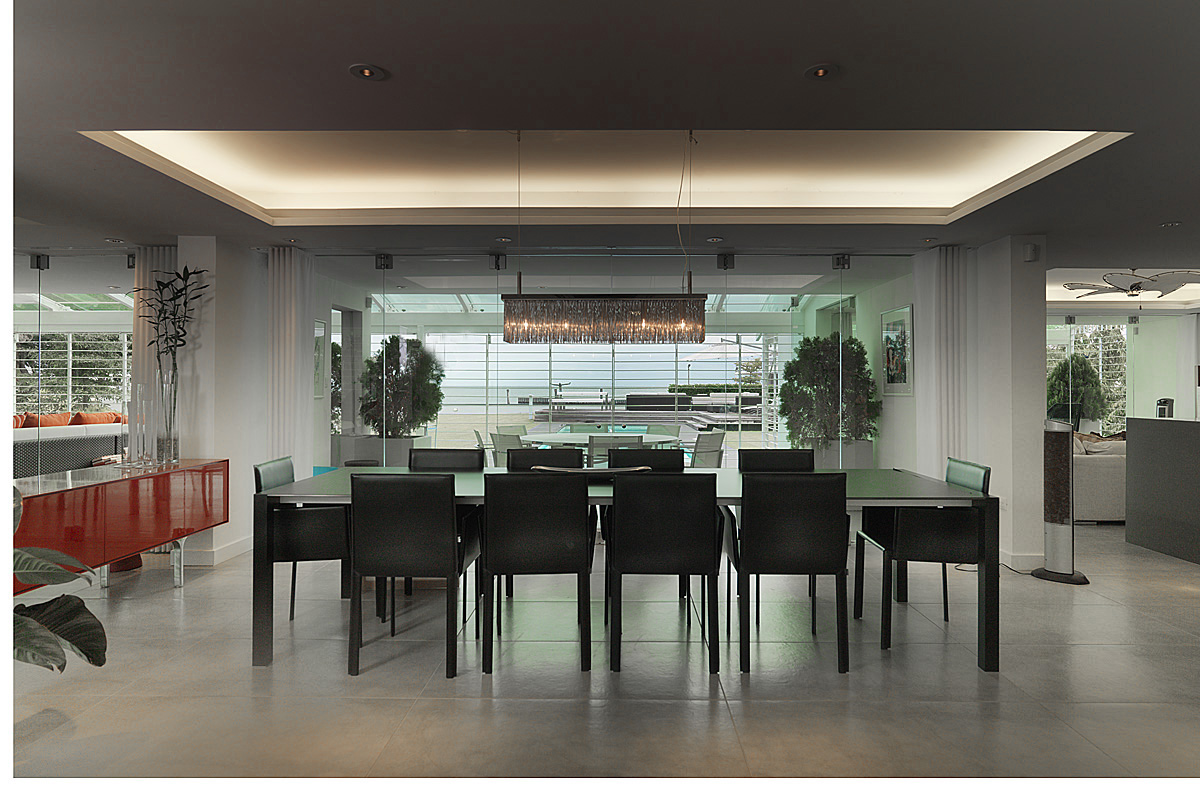 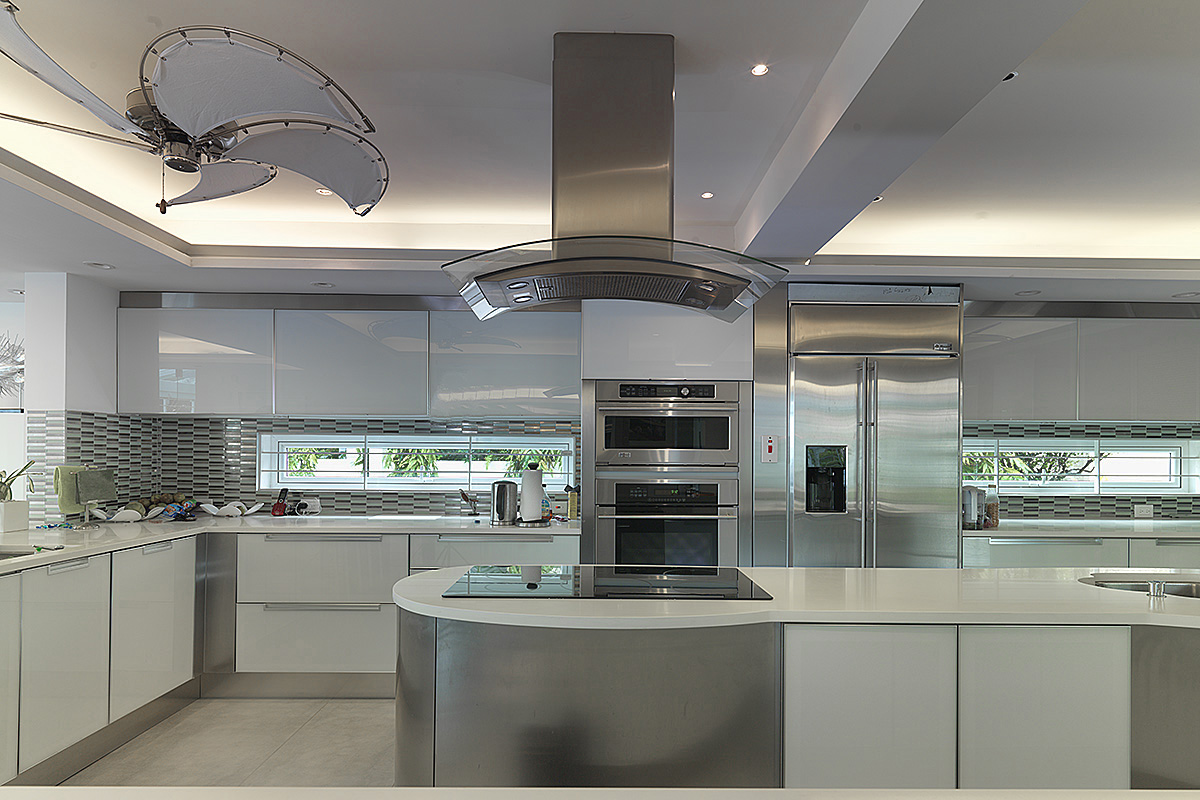 The minimalist kitchen in silver and white 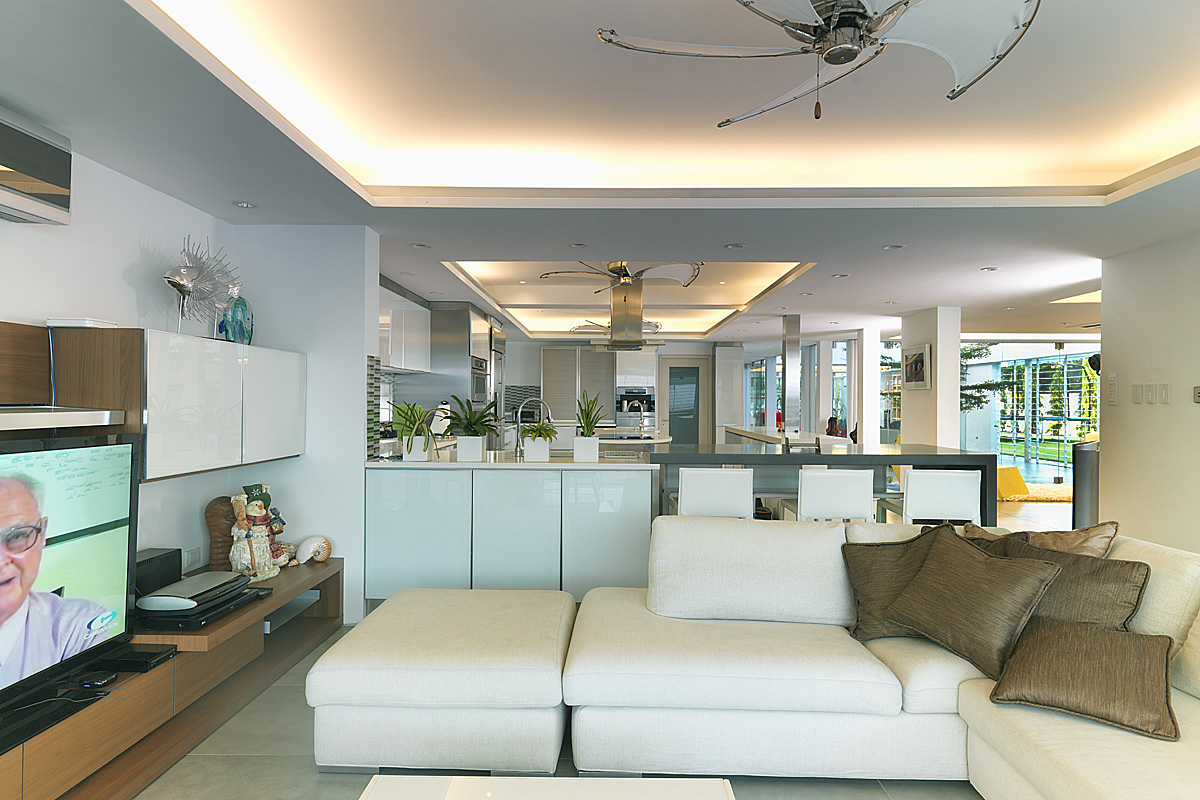 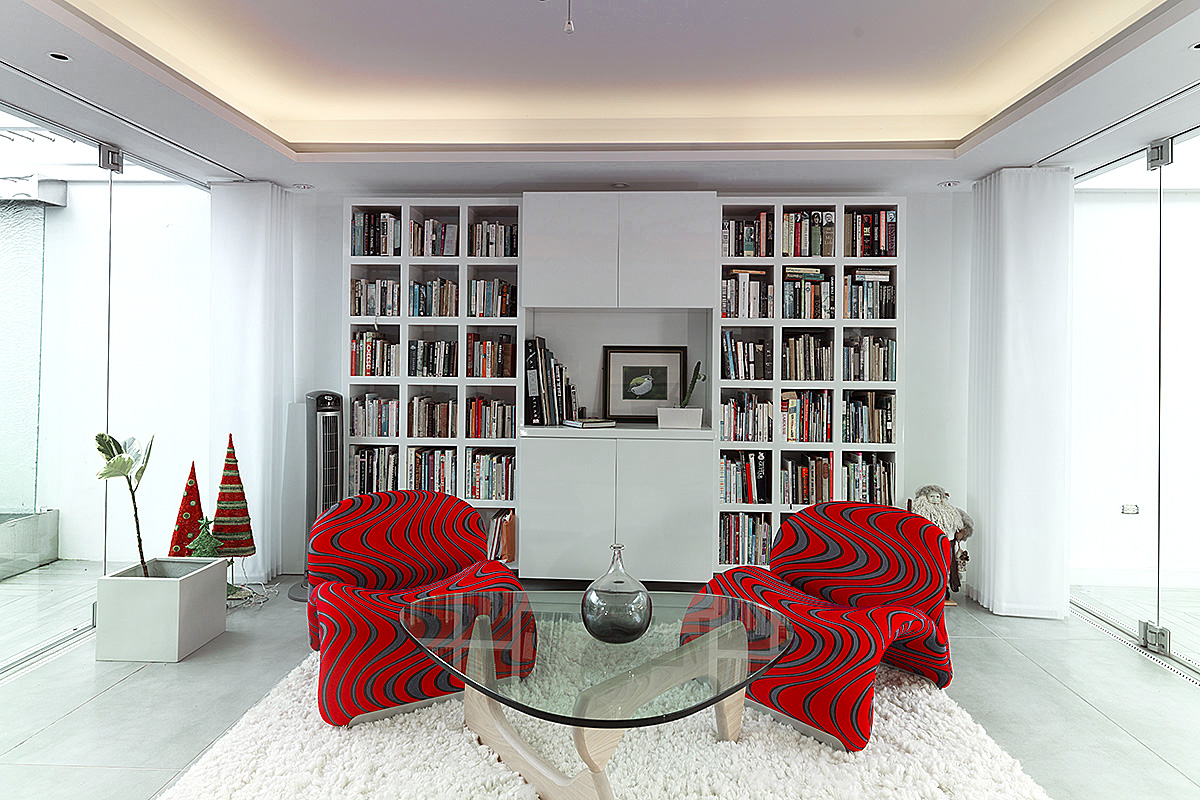 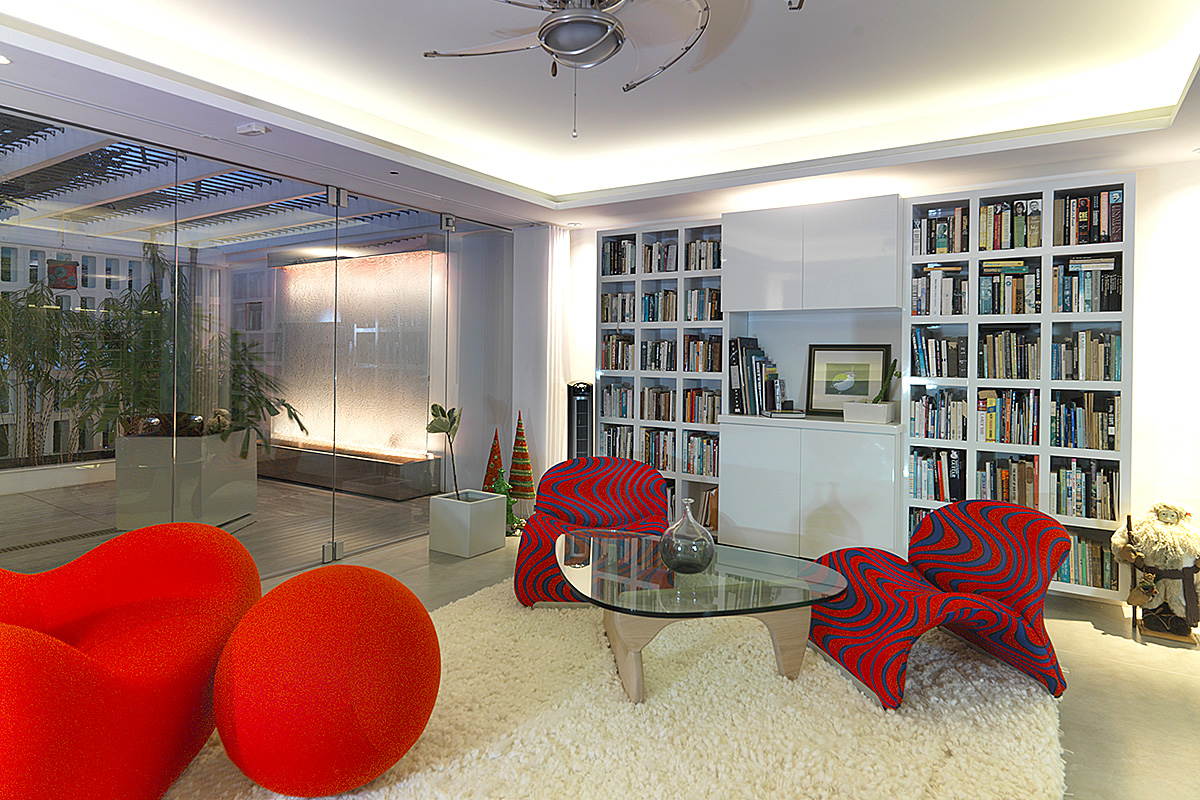 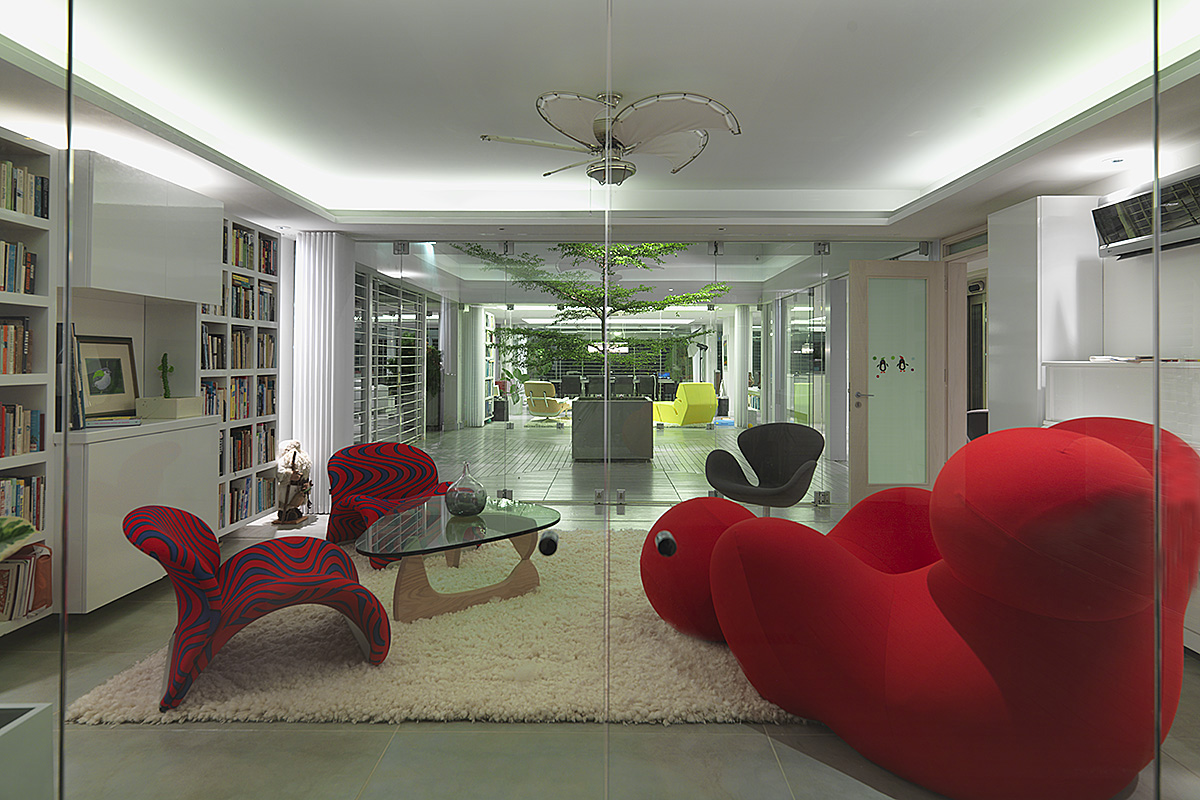 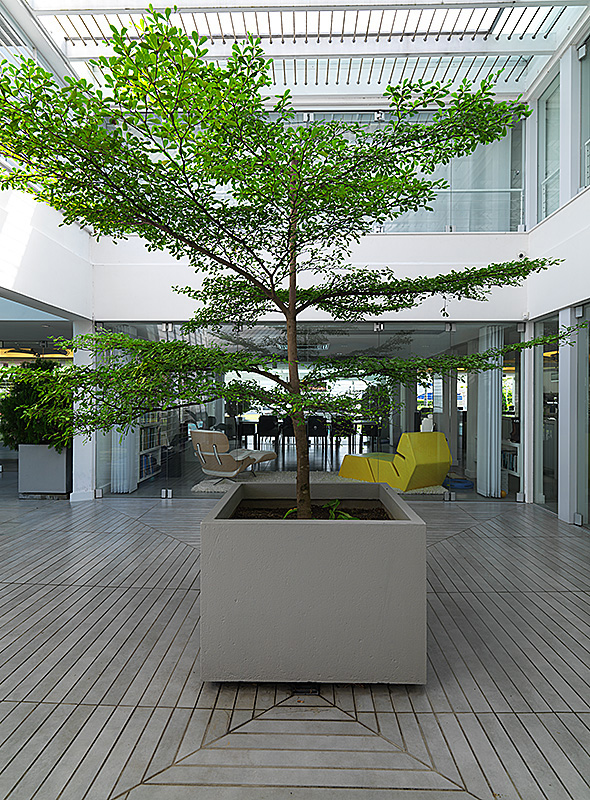